I felt increasingly tired and achy, and several times at night I’d wake up in a sweat, then get the chills. I’ve tried to be really careful about ticks—and I’d managed to avoid tick-borne illnesses for eleven years, after missing my daughter’s college graduation with Lyme and ehrlichiosis—but my symptoms felt depressingly familiar. My doctor agreed, and put me on Doxycycline, the preferred Lyme antibiotic, without waiting for the results of the blood test.

People often say that once you’ve had Lyme you’ll always test positive, but that’s not true. Lyme antibodies can remain in the blood for months after treatment, and in some cases for a few years. But they eventually disappear. And, in fact, when my test results came back they were negative for both Lyme and ehrlichiosis. But they were positive for babesiosis, which the New York Department of Health describes as “a rare, severe and sometimes fatal tick-borne disease.” WTF!

Babesiosis is caused by a parasite that attacks red blood cells, and is therefore similar to malaria. My friend Ed was hospitalized with it a couple of years ago, and was very seriously ill, but sometimes it’s so mild as to be symptom-free, or virtually symptom-free, and in those cases the Centers for Disease Control recommends doing nothing but paying close attention. (The treatment is semi-nasty, and different from the one for Lyme.) Anyway, my doctor decided that I probably have Lyme, too, even though it hadn’t shown up in the blood test yet—you can get a full banquet of tick diseases from a single bite—and that I should complete my three-week course of Doxycycline. That means playing golf in long sleeves, long pants, a huge hat, and lots of sunscreen, because Doxycycline makes your skin extremely sensitive to the sun. In fact, Gene’s daughter once went skiing while taking it, and high-altitude solar exposure caused the whites of her eyes to temporarily turn brown.

On the other hand, I’ve had four of my best rounds of the year since I started taking the pills.

Hacker (real name), David W., and Peter A.’s wife, Denise, have Lyme disease, and Reese has ehrlichiosis, which my wife and I both had several years ago and which can be thought of as Lyme disease delivered by sledge hammer. (You can get Lyme and ehrlichiosis from the same tick bite, as I did—a nasty combination.) The standard treatment for both diseases is the antibiotic doxycycline; all three are taking it.

When you’re being treated for Lyme, you have to be extra careful about the sun, because doxycycline can make your skin extremely vulnerable to burning. Gene P.’s daughter once went skiing while she was taking it, and even though she wore tinted goggles the sun made the whites of her eyes turn brown. They stayed that way for a few days, too. Reese played golf while he was in treatment—what else was he supposed to do?—but he was careful to wear lots of sunscreen, and he covered up everything he could bear to cover up:

Appropriately, I guess, we declared last Sunday Lip Balm Day, because the people who make Golfersskin, the official sunscreen of the Sunday Morning Group, had sent us a bunch of tubes to try:

I got careless about sunscreen during one of my bouts with Lyme, because it was mid-October and I wasn’t thinking about the sun, and midway through a round of golf I suddenly felt as though my lips had burned off. Never again. Here’s Stanley, who is also a veteran of both Lyme and ehrlichiosis, putting some Golfersskin on, even though it looks like he’s just pulling on his lip: 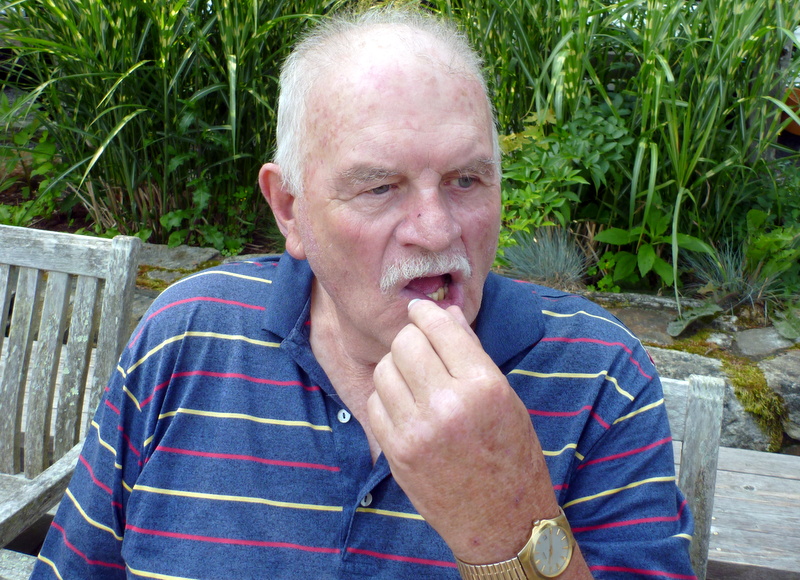 We had to tee off at 6:30 on Lip Balm Day—an hour early—because our club had created a new event, called Family Day, to encourage more people to become interested in golf, and had scheduled it for 10:00. That was annoying. Still, there were just sixteen of us and more than seventy of them, and getting home earlier than usual turned out to be a good thing because if you fall asleep before noon you’re not taking a nap—you’re just going back to bed. Here are the people who showed up for Family Day:

It’s never too early to teach golf etiquette. The thing we emphasized to the kids is that, if they serve themselves from the Sunday Morning Group’s kegerator, in the storeroom next to the men’s locker room, they need to leave two dollars in the beer-money box. You would not believe how many people “forget” to do that.